A ‘maybe’ genocide? The domestic and international factors enabling the Rohingya genocide 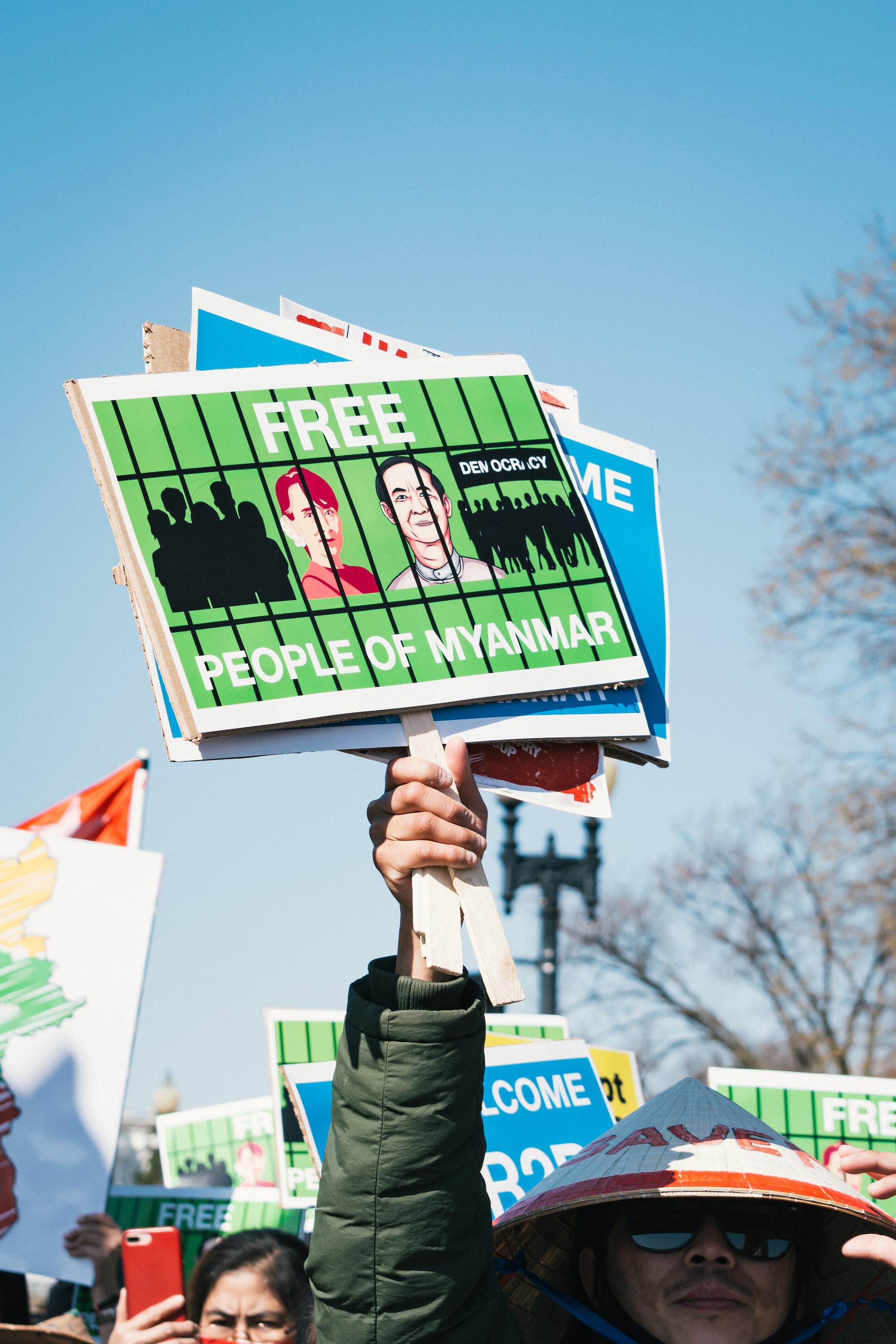 A military coup, arrest of state councilor Aung San Suu Kyi and ongoing popular protests again thrust Myanmar into the limelight.  Once a beacon for human rights, Aung San Suu Kyi led the National League for Democracy (NLD) to victory in the first open elections in twenty-five years. Myanmar is however facing a charge of genocide by the International Court of Justice (ICJ), which did not impact Suu Kyi’s popularity, garnering up to 79% of the public trust in 2020. Also a Nobel Peace Prize Laureate, Suu Kyi denied the allegations.

What is now called the Rohingya genocide began in August 2017, when Myanmar’s Army cracked down on the Rohingya, sending hundreds of thousands towards Bangladesh. A million-strong before 2017, more than a third of the Rohingya inhabited the impoverished Rakhine State. To date, some 712,700 have fled to Bangladesh, 128,000 are internally displaced and some 600,000 are housed in the Kutupalong refugee settlement within a meagre thirteen square kilometers. Estimates suggest that more than 24,000 murders, 18,000 rapes, 116,000 beatings and 36,000 immolations have occurred, in what the UN dubbed a “textbook example of ethnic cleansing.” The role the military, the coup, and Suu Kyi played will be debated for years to come. However, structural factors which brought it about should not be discounted.

The Rohingya, dubbed by UN Secretary-General Guterres as “one of, if not the most discriminated people in the world,” are a Muslim ethnic minority in predominantly (ca. 90%) Buddhist Myanmar. They are also the second largest stateless community after the Palestinians. Statelessness was conferred on them under the 1982 citizenship law, which granted nationality along ethno-religious lines. They are believed to be descendants of traders and settlers from Iran and India, who settled along the coastline of the Rakhine state, then the Arakan Kingdom, in the 15th century.

While religious violence had not taken place in Myanmar until the last century, Buddhits used their religion to define themselves against foreigners and to exclude religious minorities. Francis Wade, a journalist specializing Myanmar, emphasizes how neglectful British colonial rule (1885-1948) and migrations sowed the seeds of conflict. Muslim Indians moved to Myanmar, as workers, laborers, clerks, civil servants, soldiers, and money lenders, and began to exert considerable influence by the 1930s along with Christian missionaries, creating a feeling that Myanmar’s Buddhist identity was becoming diluted by foreigners. Muslims were first targeted by Buddhist nationalist movements in the 1920s and 1930s that portrayed the former as “stooges of the British” and as infiltrating the Buddhist bloodline through intercommunal marriage.

Wade postulates that further manipulation of Buddhism by the military after seizing power in 1962 for the purpose of homogenizing the population and nation-building formed the basis of the persecution of the Rohingya. This interpretation is challenged by Mary Callahan, associate professor at the Henry M. Jackson school of International Studies, who posits that Buddhism was promoted as a “nation building tool” only after 1988, after the socialist regime fell. Nonetheless, the socialist regime still purged the army of Muslims in 1962, expelled up to 200,000 Rohingya in 1977, and passed the 1982 citizenship law, which stripped Rohingyas of their rights.

Authors like Sassen argue that after opening the country to foreign investment in 2012, the military began expropriating land en masse. The land was used for geothermal, mining and timber projects such as the Yadana pipeline, which cost $1 billion, but employed only 800. With Myanmar regarded as “the last Asian frontier,” the Rohingya genocide takes on a new dimension. Expulsions served to free up more land and water, while the religious focus helped divert pressure to force the government to stop evictions of all landholders.  This take is challenged by Jones, who posits that areas the Rohingya were ethnically cleansed from were far away from any of the key major projects and that the conflict is based on Buddhist-Muslim land and resource disputes. Identity is still crucial to understanding the deeper roots of the genocide in politics, society, and economics and one ought not discount it.

Despite Myanmar technically being a democracy, the military retained power and influence and easily launched an ethnic cleansing operation. The ideological and material factors were not mutually exclusive, but mutually reinforcing. To understand what is needed to carry out a genocide, both factors must be considered.

Under the continuous pressure to ensure human security, the UN has adopted a universal framework to prevent the kind of atrocities that happened in Myanmar. One may be surprised to discover that the “Responsibility to Protect” (R2p) was endorsed by all UN member states in 2005. A sovereign state’s failure to fulfill its responsibility to protect its citizens from “genocide, war crimes, ethnic cleansing and crimes against humanity” would warrant international humanitarian interference, ranging from economic sanctions to peacekeeping interventions. Independently of the UN, both the European Union and the United States briefly placed sanctions on Myanmar in the early 2010s. However, sanctions were lifted by 2013, without any tangible progress in the Rohingya people’s situation and the military junta remained in power.

Initially, Aung San Suu Kyi’s nomination as the State Councilor had stoked hopes among the Rohingya. Despite many Myanmar Buddhists' protests, the state formed the Advisory Commission on Rakhine State, led by the former UN Secretary-General Kofi Annan (commonly referred to as the “Annan Commission”) in September 2016. The results of the Commission results suggested a review of the 1982 law that rendered Rohingyas stateless and documented perpetual human rights violations and came out a day before the military crackdown on Rakhine state.

However, minimal action was taken on either the domestic or international level. The Annan Commission report was presented at the UN Security Council (UNSC) to discuss the possibility of R2p intervention. However, both Russian and Chinese vetoes rendered any joint action impossible.

Although the Advisory Board for the Committee for Implementation of the Recommendations on Rakhine State was established to follow through with the recommendations from the Annan Commission’s report, a number of its high-ranking international members have resigned from the Committee, citing “being kept on a short leash” and constraints on international funding and being able to set up permanent office.

A subsequent 2017 UN Human Rights Commission report defined the situation in Rakhine state as genocide, however, none of the investigators were permitted by Myanmar authorities to step foot in the country. Hence the report primarily relied on witness accounts of Rohingya refugees in Bangladesh.

In the light of the UNSC deadlock, one might wonder about the reasons behind the nation-state inactivity in the region and the effectiveness of other institutions formed to achieve justice, such as the International Criminal Court.

Bangladesh is most affected by forced migration, as approximately 700,000 Rohingya entered the country within a year from 2017. Nonetheless, the government is yet to issue any official response, which many attribute to Bangladesh’s close economic ties with Russia and China.

The Association of Southeast Asian Nations (ASEAN), the leading international organization in the region, responded weakly. Although many of its members tend to oppose R2p due to the history of colonial interventions, an emergency summit on the topic was hosted by Malaysia, but no concrete action was taken.

The UN report documented severe human rights violations that could be prosecuted under the Roman Statute, ICC’s founding document. However, two obstacles are currently preventing it. First, Myanmar itself is not a party to the Roman Statute, hence an immediate investigation on the ground could not be launched.

The second obstacle is the veto power of the five permanent members of the Security Council. If Russia and China continue to veto directing the Myanmar case to the ICC in the UNSC and there are currently no visible reasons for alteration in their voting behavior, the perpetrators will not face justice. Despite the ICC’s 2019 self-proclaimed breakthrough in justifying the investigation into the forced deportation via Bangladesh jurisdiction, no viable legal mechanism of investigating or intervening in Myanmar is currently in sight.
In Myanmar, colonial and post-colonial ethno-religious divisions coupled with conflict over land and resources spawned one of the worst human rights crises in recent memory. Like elsewhere, uninformed policy concerning the causes of human rights abuses tends only to worsen them. There is a vast literature arguing for revoking the veto power of permanent UNSC members, and the above-described case of Myanmar is one of many examples pointing in this direction. Nonetheless, there is doubt that the permanent Security Council members' veto powers could fall victim to death by thousand cuts of academic papers. Swift action is required and yet it is impossible without a vast institutional reform of global governance.

An undergraduate Liberal Arts student with an Interdepartmental degree in Political Science and Art History.

China’s navigation of the chess game that is foreign affairs and international politics is not only remarkably unique but incredibly strategic.…

On the 29th of April 2021, the President of Sri Lanka, Gotabaya Rajapaksa, announced a total ban on agrochemicals, proposing that Sri Lankan farming would be 100% organic.…

Perhaps, the single most salient collective social experience for all conscripts is stepping into a barbershop for a buzz cut, that macho crop unpopular among young Korean men. Their friends film the whole process, capturing the moments of surprised reaction and raillery.…