The continued plight of Beirut’s residents, 10 months on from a devastating explosion 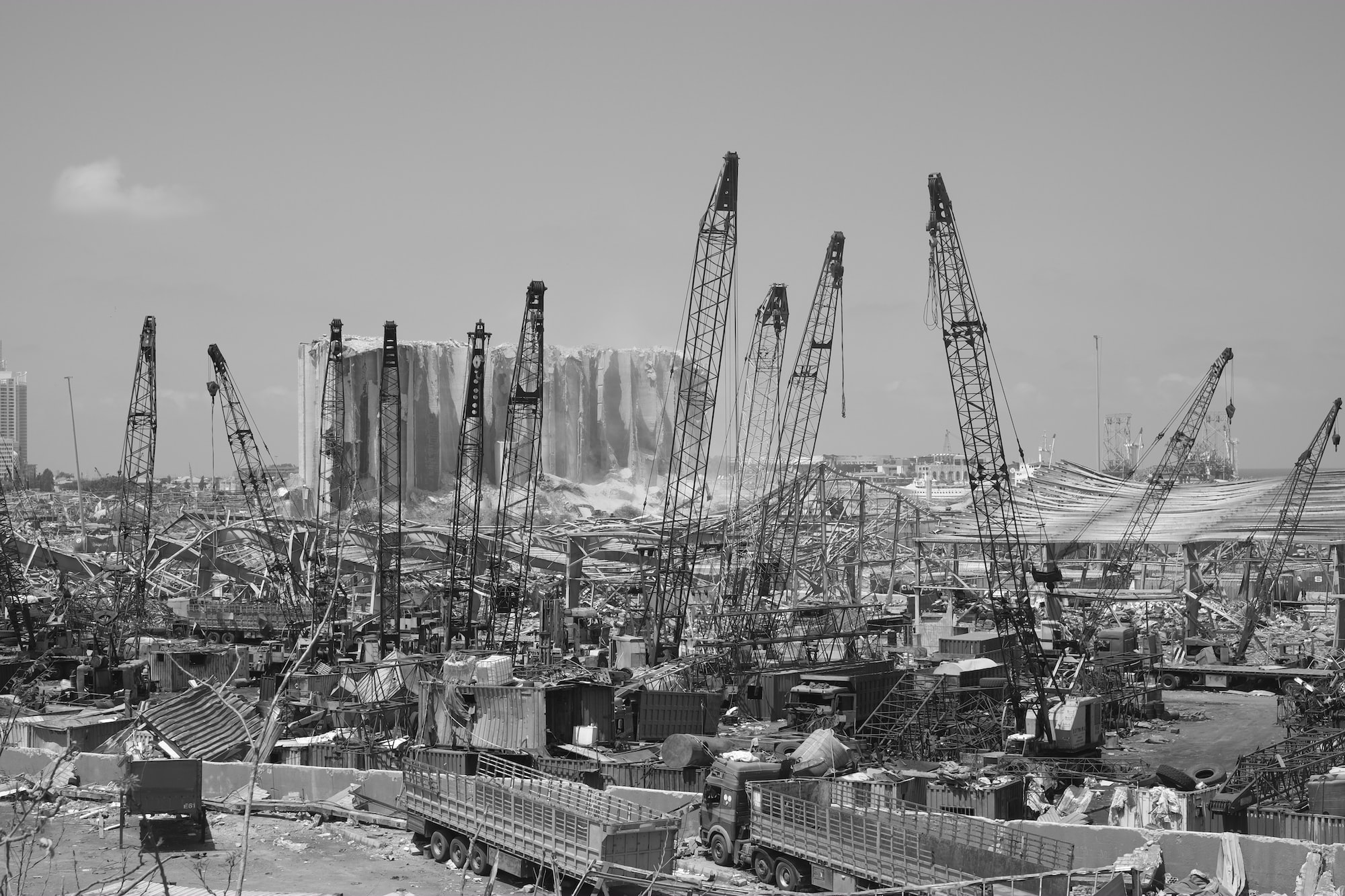 In August 2020, Lebanon was in the midst of a surge of Coronavirus cases across the country, coupled with a crippling economic crisis that had taken the national poverty rate above 50% of the population and was ongoing since October of the previous year. However, the Middle Eastern nation would be dealt another devastating challenge to take on, when on the 4th August, 2,750 tonnes of the highly flammable chemical ammonium nitrate exploded in the port of Lebanon’s capital Beirut.

The explosion sent shockwaves across the country, leaving 207 civilians dead, over 6,500 injured, and another 300,000 displaced. Over ten months later, a large hole sits where silos filled with grain reserves used to stand, a scar on the Beirut landscape that provides a constant reminder to the city’s residents of the tragedy that occurred last August.

Thousands are still mourning the loss of loved ones, and even more Lebanese civilians remain without a permanent or substantial home. Moreover, the economic crisis continues to decimate the country’s economy, and the issue of unreliable governance still remains.

The scene in Beirut as of today is still largely one of destruction. In February 2021, six months after the explosion, rubble and scrap metal still lay strewn out across what remains of the port area, and a cruise ship floated in the water on its side after being hit by the force of the explosion. The windows of apartment buildings and high-rises that faced the area of the explosion are still mostly missing, something which has personally affected Lebanese journalist Rania Abouzeid. Rania describes the aftermath of the explosion, which left her neighbourhood of restaurants and galleries looking like a war zone. She explains how all of the apartment windows in her building were shattered and her flat was left with broken water pipes, cracks in the wall and even marks of blood of an employee from the office below who suffered head injuries and a broken arm.

Immediately after the explosion, volunteers and residents alike began to clear away the primary debris that had blanketed over the centre of the city. Architect Gilbert Nicolas led a team of 70 volunteers in this effort, but expectations remain from people such as Gilbert that the reconstruction process will take years. As of January 2021, 9,000 of the homes damaged by the explosion still need repair, and areas heavily affected by the blast are home to some of the poorest Lebanese residents as well as many refugees.

Not only was the explosion a direct disaster for the people of Beirut, but it has exacerbated the already significant economic crisis in the country. Public sector debt, bankrupt financial institutions and hyperinflation have all contributed to Lebanese economic disaster, something which has become increasingly unbearable as a result of the explosion. The severity of the financial situation has been highlighted by a recent report from the World Bank which stated that Lebanon’s economic crisis could be amongst the worst three in the world since the 19th century. As a result, more than half of the population is likely below the poverty line and purchasing power is rapidly decreasing as the Lebanese pound continues to fall in value. The cost of basic goods have increased dramatically, with the price of cooking oil increasing by 16-fold, paracetamol costing 4 times as much and a plain T-shirt going up from 6,500 Lira to 55,500 Lira since March 2019.

In response to the financial situation, many Lebanese people are deciding to leave the country in hope of finding employment. Many of these migrants are highly skilled too, with estimates stating that 20% of Lebanese doctors since October 2019 have left or plan to. Pharmacist Rita El Khoury is one of many Beirut residents that has decided to leave after the explosion who feel that this was the last straw in a string of events that had made life in Lebanon increasingly difficult. This latest wave of emigration is causing notable concern, with President of the American University of Beirut, Fadlo Kuhri, stating that the explosion has accelerated the ‘brain drain’ in Lebanon, adding that healthcare professionals “are leaving because of a combination of despair in the country's future, the lack of faith that the country and its key institutions can survive and the fear for their families' future”.

Such a crisis has also significantly affected refugees living in Lebanon in particular. Shama al Hadid, a Syrian living in the Saadnayel refugee camp and mother of two, has stated that Ramadan this year has been greatly restricted in terms of food available, going from a fridge “full of meat, chicken and vegetables for Ramadan iftars” to much smaller meals consisting of salad, soup and potatoes. Food shortages have been coupled with a decrease in the availability of aid for such refugees, meaning that families are even more restricted in terms of accessing food as aid funds have been redirected in response to the port explosion. As a result, 9 out of 10 Syrian families in Lebanon are now in poverty with little access to employment and many live on less than 308,000 Lebanese pounds a month, equivalent to around £143.

Despite the economic and social impacts that the port’s explosion has had on the people of Beirut and the wider country, efforts are being made to rebuild the area affected by the blast, as well as restore financial stability to the country and reduce poverty. A number of investment plans have been proposed over the last year as Interim Port Director Bassam al-Kaissa stated in April “Everyone has their eyes on the port: the Russians, the Chinese, the Turks, the French and now the Germans” after a group of German companies proposed a $30 billion dollar project to rebuild the port area on the 9th April. In principle, the project aims to facilitate the completion of clearing debris from the area and then moving on to reconstruction, but the European Investment Bank (EIB) — whom the project would receive funding from — has stated that “there currently is no financing offer by the EIB” as the project “would be subject to due diligence and have to follow the Bank’s usual processes”.

Along with the German investment plan, French container shipping group CMA CGM announced its plans in April to rebuild and later expand the port, all of which is estimated to cost between $400-600 million according to Joe Dakkak, the General Manager for CMA CGM Lebanon. With regard to the German project, Dakkak recognised that it would be more long-term and focused on real estate as well. He also added that if invited, CMA CGM would help contribute to the German project.

The social impacts from last year’s explosion have also been addressed by human rights organisations and the international community. The EU has provided 5 million euros to a number of non-governmental organisations (NGOs) in order to assist those affected. In total, these funds helped 13,000 people in the blast’s aftermath. Due to the funding, 1,600 homes were fully restored and are liveable again, 91 small businesses received emergency cash, and almost 2,700 were given legal advice regarding their tenancy in affected areas. The EU has also organised a scheme which aims to support small and medium businesses owned by women that were affected by the blast. 30 female-led businesses from a shortlist of 80 will receive grants equivalent to 5000 euros in order to offset the impacts of the explosion last summer.

The humanitarian organisation NORCAP, which is run by the Norwegian Refugee Council (NRC), is another group which has offered significant aid to those affected by the blast. On the 3rd June the NRC stated that “Now, more than nine months after the explosion, while some of the most urgent issues related to shelter and repairs have been resolved, protection and shelter needs have changed”. Many residents in Beirut are currently facing possible eviction, either due to lack of money or increased rent prices from landlords because of the repairs that are required. After many months of supporting those with immediate problems, NORCAP has adjusted its focus to providing legal assistance to those facing the threat of eviction.

The relief provided to Beirut’s residents has been crucial and the investment proposals to reconstruct the port and surrounding area gives hope for the future of Lebanon’s capital. However, the political structure that remains in Lebanon is one that is fragile, and the investigation into the explosion remains inconclusive. Days after the blast, the entire Lebanese Cabinet resigned, acknowledging their negligence over the flammable fertiliser stored in the port but also leaving the country in a political limbo. Over the past months, interim Prime Minister Saad Hariri has been attempting to form a new government. However, President Michel Aoun has continuously rejected Hariri’s proposals.

As for the near future of Lebanon’s government, there is little room for optimism. On the 2nd of June, Hariri and Aoun once again butted heads, accusing each other of negligence, obstruction and still refusing to agree on the formation of a new government. Without such a government in place, there is little hope for Lebanon to see itself fully recover from both the port explosion and the ever-worsening economic crisis. Investment proposals such as those from Germany may provide more incentive for Michel Aoun to form a fresh government, but failure to do so will prevent any investment from becoming a reality.

The progress already made on restoring the homes and livelihoods of Beirut’s residents is promising after last August’s explosion, yet the continuing economic crisis and lack of stable governance will leave Lebanon stranded until both problems are resolved.

Callum is a graduate in Human Geography from Cardiff University. He is currently aiming to study a Masters in Journalism.

Islamophobia after 9/11: the unintended victims of terrorism

September 11th, 2021 marked the 20th anniversary of the 9/11 terrorist attacks, in which the World Trade Center and The Pentagon, the headquarters for the US Department of Defence, were targeted with hijacked passenger planes. These attacks ultimately claimed almost 3,000 civilian lives…

Saudi Arabia is arguably the least democratic of the Gulf states, yet it is wholeheartedly backed by the United States of America. This diplomatic relationship, one which grew even warmer under President Trump, threatens…

Biden and the Middle East: What does the new President mean for the Kurdish community?

Following the uprooting of ISIS from Baghuz, Northern Syria, by Kurdish-led SDF forces in 2019 the question surrounding Kurdish autonomy and nationhood has reappeared in the minds of leaders around the world. The group now occupies pockets of ex-ISIS territory…